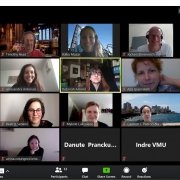 The ECCOE partners have just run an intense three-day online project meeting, from Tuesday May 5th to Thursday May 7th 2020. This meeting should have taken place in Milan, but obviously due to the lockdown situation across Europe this was not possible. We had several options: postpone, run a series of shorter meetings over a longer period, or concentrate the work over the days initially scheduled for the face-to-face meeting. We chose the latter as a) the project is at the stage where we really needed to focus on key issues, b) people had already blocked those dates in their diaries and c) at the time of making the decision certain partners anticipated heavy workloads within their institutions in the coming months.

By the end of the third day we were all naturally very tired, but felt it had been a great success. So the aim of this blog post is to take a look at why and how it worked, with the aim of helping others who have to organise such meetings. This may become more and more the norm, as travel restrictions are not yet lifted, and even once they are, people may want to reduce the carbon footprint of such transnational project activity.

So, why did it work so successfully? We look at a few key points…

The decision was made collectively, after gathering insights from similar experiences where partners had been involved in online transnational project meetings as participants or organisers. We weighed up the pros and cons of each option, discussed them and then agreed on duration and format.

We set the basic principle of a three-day meeting, focussing sequentially on each of the four ongoing Intellectual Outputs (IOs). The question of whether to run this in parallel groups was envisaged but rejected in favour of the sequential approach, as one partner put it:

“We… believe that although the Zoom breakout rooms sound very useful, since we have a small enough partnership where probably everybody would prefer to be engaged with all planned discussions, it would be preferable to have the group meetings in sequence and not in parallel.”

We set up a detailed agenda as a shared, editable document. We do this for all meetings, but the key to success here was in the level of detail, with explicit instructions for each of the key points to be covered. These included
• Goal to be achieved
• Time needed
• Way of working
• Key documents and resources
Each partner responsible for a given agenda point was free to decide on the most appropriate approach, and all key resources were linked to from the agenda, meaning that everything was accessible from this single reference document.

We divided up the responsibilities

In addition to those in charge of running a particular session, we had time-keepers and note-takers, and one partner in particular emerged as the ‘break requester’!

In the preparation stage, we took into account the lessons learned from previous experience:

“We didn’t get a lot of help with the collaborative minutes since people were focussing on the Zoom session. Understandable, I guess. I found it easier to take my notes by hand, for the same reason, and add them subsequently.”

“We should learn from [A]’s experience and prepare for minute taking, maybe identifying a main note taker (I, [B], nominate [C] :-), who is an excellent note taker and who may not be under so much pressure as the other IO leaders whose work will be discussed) and one or two supporters.”

We kept to task

The detailed agenda proved an excellent guide, in particular with the focus on goals, ways of working and listing of key documents. The one adjustment we made was in integrating the relevant findings of the recent quality review at the start of each session, so we could focus on successful aspects, challenges and suggestions for improvement, before launching into the discussion. We came back to the goals and the quality review at the end of each session to check whether we had addressed them, and also took the time to review the note-taking.

Again, this was in response to previous experiences shared by partners:

“I think it requires a lot more discipline than in a F2F meeting, and it puts a lot more stress on the organiser to be polite but brutal with time management!”

“Keeping the time schedule was really important, we constantly checked with agenda and time to not lose the time too often. People are not robots, it is impossible to fulfil the agenda perfectly due to discussions, but constant reminders helped stay on track.”

We all agreed that we had achieved a great deal, especially in terms of improved overall understanding. This was thanks to the fact that we put the emphasis on discussions and collaboration, rather than a succession of presentations.  And we had numerous breaks!

We had the right attitude

We demonstrated empathy, trust, respect and flexibility. In the preparation stage, we understood that some partners might have family commitments not compatible with the meeting schedule, and adapted where necessary. We discussed the implications for people in a different time zone. During the meeting itself, we listened attentively, and collaborated fully in the work that was set by each of the output leaders. We paid attention to surfacing different visions and addressed these respectfully. As one partner said:

“Our disagreements are soooo constructive!”

All in all, it was a very successful meeting. Of course these online meetings are challenging and tiring, and we miss many aspects of what a face to face meeting brings. Although we did have an informal social moment in the form of an optional online aperitif on the second day, we already knew from the experience shared in the preparation stage that some aspects would be a challenge to replicate in an online meeting.

“Obviously there is nowhere near so much quality time for reflection and gentle discussion, like you would have in a F2F event (not so much the event in itself but the coffee breaks, lunch times, etc.).”

Have you recently run such a transnational online meeting? Does this reflect your experience? What other tips and suggestions would you propose? And if you are planning such a meeting, what additional advice would you like, from us or from others? Feel free to contribute in the comments or engage with us on social media, via the @EccoeProject Twitter account and/or with #EccoeProject.

Want to join the discussion?
Feel free to contribute!