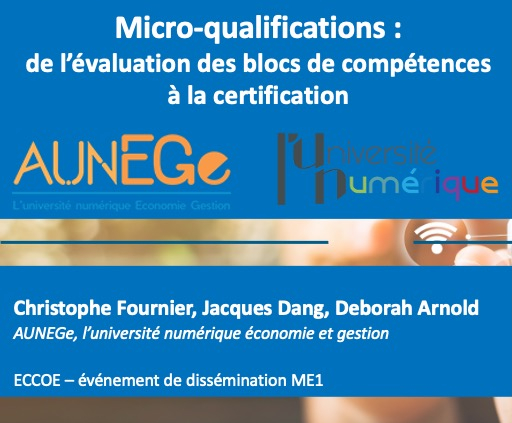 On Wednesday December 15th 2021, the ECCOE coordinator AUNEGe joined forces with two important organisations – IAE France (the network of university schools of management) and FNEGE (The French Foundation for Management Education) for a full-day webinar on the topic of a competency-based approach to management education and the link with digital micro-credentials. The event was organised within the frame of the IAE France Competency Observatory, with a joint welcome by Jérôme Caby, delegate general of FNEGE, Christophe Fournier, President of AUNEGe and Eric Lamarque, President of IAE FRANCE.

The morning session was introduced by Anne-Sophie Barthez, head of the Directorate for Higher Education and Employability at the French Ministry of Higher Education, who highlighted the strategic importance of the work being undertaken in this field. This was followed by a round table led by Marie-Noelle Chalaye, Director of IAE Bretagne Occidentale, during which Aline Scouarnec, IAE Caen and Franck Brillet, inspecteur général de l’éducation, du sport et de la recherche, gave an in-depth account of developments in competency-based approaches in French higher education. This was followed by a testimonial from Mathilde Gollety, President of the CEFDG (Commission d’évaluation des formations et diplômes de gestion), who explained how such an approach has been implemented by private schools of management.

French HE is at a turning-point: diplomas are now described in terms of ‘blocs of comptences’ aligned with the French Qualifications Framework (RNCP), itself now aligned with the European Qualifications Framework (EQF). What is now needed is a true focus on getting all stakeholders on board (academic and professional staff, students and employers) to develop a new mindset where this is no longer perceived as a constraint, but as an opportunity to better serve students and society.

The rich insights from the morning session provided the perfect backdrop for the ECCOE Multiplier Event (ME1) attended by over 35 participants. Jacques Dang, Secretary to the Boards of both AUNEGe and l’Université numérique, kicked off with an overview of international trends and challenges with respect to micro-credentials. Deborah Arnold, national and international projects coordinator at AUNEGe and coordinator of the ECCOE project, then led the group through a step-by-step application of the ECCOE adaptation of European Digital Credentials for Learning (O4), starting from the description of a block of competences from the RNCP and demonstrating how this could easily be represented as a trusted digital micro-credential, drawing on the detailed work completed in ECCOE regarding quality criteria for credential description (O1) and learning opportunities (O3). Issues such as the level of detail required for describing assessment and learning activities were addressed, as well as the solutions for cross-institutional recognition developed by the ECCOE partners in the form of Model Credit Recognition Agreements (MCRA – O2).

The event was a great success and gave rise to much discussion, as well as to several concrete solicitations from participants wishing to develop micro-credentials, either within their institutions or in the frame of European University Alliances.

The overall conclusions of the day were that:

AUNEGe and ECCOE would like to thank the IAE France team for this wonderful opportunity to build synergies, and for all the support received in designing, promoting and running the overall event: Laurence Macaluso (general manager) Marie Monsterleet (communication and events manager) and Manon Malfoi (administrative and communication assistant).