On 15 June 2022, the European Credit Clearinghouse for Opening up Education (ECCOE) seminar took place in Klaipėda. The aim of the workshop was to present the results of the ongoing international ECCOE project, to discuss and present what micro-credentials are, and to discuss with the participating teachers, educators, and representatives of educational institutions how to increase the acceptance of open, distance and flexible higher education through technology-based accreditation systems.

The workshop started with a presentation of the international project. The objectives, activities and results were presented. The workshop then went on to present the quality criteria developed for the description of courses, module competency cluster certificates and diplomas.

The workshop focused on practice, i.e. the development of micro-credentials and discussion questions. The workshop participants practised how long it takes an inexperienced person to create a microcredential, what are the challenges, and, during the discussion, the workshop participants formulated strategic directions from the practitioners’ side on how to increase the recognition of open, distance and flexible higher education and, more generally, which target groups could benefit from this technology-based accreditation system.

You will find the slides of the seminar 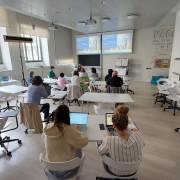 On Wednesday May 31st 2022, Politecnico di Milano – METID hosted a seminar on the premises of the Educafè experimental space, with the aim to raise awareness among participants of the underlying concepts behind the notion of micro-credentials and of the pivotal issues related to them.
The event gathered 12 external participants with diverse profiles from Lombardy and nearby regions: university staff in the areas of international relations, recognition of learning and online services, a headmaster and teachers from technical high schools, staff from training and employment and for volunteering agencies.

The event explored what digital micro-credentials are and the European frameworks that can support them (e.g. EQF and ESCO), provided a practical demonstration of how descriptors work in a MOOC, explained how to issue a micro-credential by using the Europass Digital Credentials Infrastructure and covered the practical solutions developed by the ECCOE project.

The seminar was designed with a hands-on approach: participants were asked to contribute to an open consultation about relevant descriptors for learning opportunities, so that they got involved, improved their understanding of the topic and had their say on the (experienced or perceived) barriers to the uptake of micro-credentials.

The main takeaways from the final discussion were that employers might be reluctant to recognize micro-credentials in vocational education and training without proper catalysts, whereas in higher education actions like the European Universities initiative can act as innovation drivers towards micro-credentials, as some attendees involved in it stated.
In order to boost the impact of dissemination through a cross action, a “cameo” (short presentation) of the ECCOE project was presented during the Multiplier Event of a relevant Erasmus+ project named EdDiCo – Supporting the Development of the Digital Competences of Educators [https://eddico.eu/] on Thursday June 16th 2022. 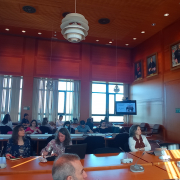 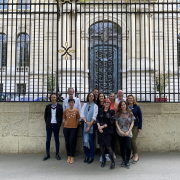 The ECCOE project recently held the ‘final’ face to face partner meeting on May 3rd and 4rd in Paris. Rather than wait until the end of the project for such a meeting, we decided to organise it in quick succession after the Madrid meeting to build on the dynamics and fine tune the last actions before the project comes to an end in August 2022.

The meeting was hosted by AUNEGe, the project coordinator, in our offices just off the Champs Elysée. The weather was kind to us, and partners enjoyed the “Paris in Springtime” experience, as well as concentrating hard on the tasks at hand. After the traditional budget and spending overview, we set ourselves down to identify the added value we could bring to each of our promised outputs, and also refined our quarterly planning to ensure that no task, however small, gets forgotten in these final months of the project.

The most satisfying activity (apart from the project dinner!) was the ‘Shut Up and Write’ session to work on our series of ‘How to’ guides. These will soon be integrated in the ECCOE-system and will help different stakeholders understand not only how the different ECCOE outputs can be implemented, but also the wider issues around digital micro-credentialing. Look out for the announcement of their publication shortly!

Even though this will sadly be the last time we see each other face to face as part of the ECCOE project, our online meetings continue, as do our asynchronous communication and collaboration, and our outreach activities such as Multiplier Events and conference presentations. Busy times ahead, but with much satisfaction in contributing, as we are doing, to taking forward the field of digital micro-credentialing in Europe. 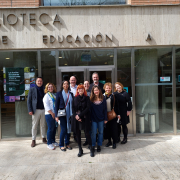 On the 28th and 29th of March the partners met up for the fifth meeting of the ECCOE project. It was hosted by UNED, in Madrid, and it took place in the Central Library of the main campus of the university, which has a fantastic view of the city!

This meeting was a welcome opportunity for partners to meet face to face for only the third time since the beginning of the project due to the COVID mobility restrictions. Even with the monthly online meetings, and all the hard work being done remotely in the project, face-to-face meetings are crucial to move on with the project and make strategic decisions. This particular meeting was key in order to set the final specific tasks until the end of the project.

During the day and a half-long meeting, the following issues were discussed and achieved:

We had also a fabulous time on the Monday evening in a lovely restaurant serving a mixture of traditional and modern Spanish cuisine.

After this fruitful meeting, the consortium felt even more confident about the successful completion of the project.

We would especially like to thank all partners for coming in person to Madrid and giving all their intellectual effort and positive energy during the meeting.

In the frame of the eLearning for Human Capacity Development conference held on 24-27 Jan 2022 a workshop session, titled Micro-Credentials featured a presentation of the ECCOE use case on how to facilitate recognition of micro-credentials.

This workshop, delivered by KIC Senior Partner Anthony Camilleri, with the contributions of Henri Pirkkalainen (Associate Professor at Tampere University and representative of the European Consortium of Innovative Universities) and Ildiko Mazar (representing the ECCOE project), has introduced participants to the fundamentals of micro-credentials, definitions, the rationale for micro-credentials, types, and developing competency and skill-based eLearning micro-credentials based on national and international frameworks. 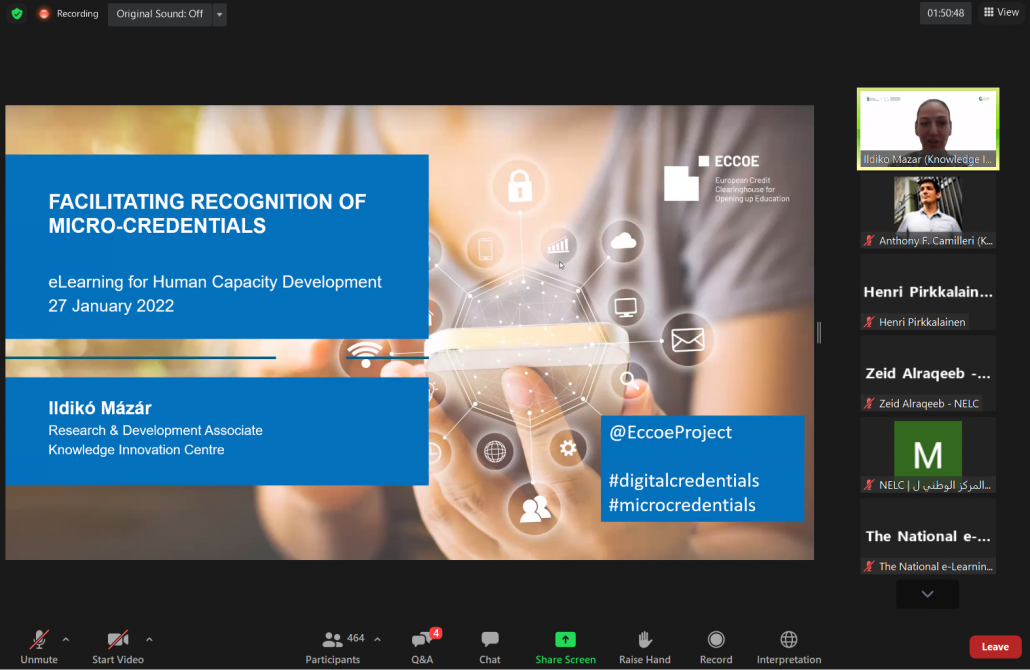 The session was attended by over 450 participants who were presented with case studies, (click here to download the ECCOE presentation), and relevant examples from a global perspective and guide them in the national context.

On Wednesday December 15th 2021, the ECCOE coordinator AUNEGe joined forces with two important organisations – IAE France (the network of university schools of management) and FNEGE (The French Foundation for Management Education) for a full-day webinar on the topic of a competency-based approach to management education and the link with digital micro-credentials. The event was organised within the frame of the IAE France Competency Observatory, with a joint welcome by Jérôme Caby, delegate general of FNEGE, Christophe Fournier, President of AUNEGe and Eric Lamarque, President of IAE FRANCE.

The morning session was introduced by Anne-Sophie Barthez, head of the Directorate for Higher Education and Employability at the French Ministry of Higher Education, who highlighted the strategic importance of the work being undertaken in this field. This was followed by a round table led by Marie-Noelle Chalaye, Director of IAE Bretagne Occidentale, during which Aline Scouarnec, IAE Caen and Franck Brillet, inspecteur général de l’éducation, du sport et de la recherche, gave an in-depth account of developments in competency-based approaches in French higher education. This was followed by a testimonial from Mathilde Gollety, President of the CEFDG (Commission d’évaluation des formations et diplômes de gestion), who explained how such an approach has been implemented by private schools of management.

French HE is at a turning-point: diplomas are now described in terms of ‘blocs of comptences’ aligned with the French Qualifications Framework (RNCP), itself now aligned with the European Qualifications Framework (EQF). What is now needed is a true focus on getting all stakeholders on board (academic and professional staff, students and employers) to develop a new mindset where this is no longer perceived as a constraint, but as an opportunity to better serve students and society.

The rich insights from the morning session provided the perfect backdrop for the ECCOE Multiplier Event (ME1) attended by over 35 participants. Jacques Dang, Secretary to the Boards of both AUNEGe and l’Université numérique, kicked off with an overview of international trends and challenges with respect to micro-credentials. Deborah Arnold, national and international projects coordinator at AUNEGe and coordinator of the ECCOE project, then led the group through a step-by-step application of the ECCOE adaptation of European Digital Credentials for Learning (O4), starting from the description of a block of competences from the RNCP and demonstrating how this could easily be represented as a trusted digital micro-credential, drawing on the detailed work completed in ECCOE regarding quality criteria for credential description (O1) and learning opportunities (O3). Issues such as the level of detail required for describing assessment and learning activities were addressed, as well as the solutions for cross-institutional recognition developed by the ECCOE partners in the form of Model Credit Recognition Agreements (MCRA – O2).

The event was a great success and gave rise to much discussion, as well as to several concrete solicitations from participants wishing to develop micro-credentials, either within their institutions or in the frame of European University Alliances.

The overall conclusions of the day were that:

AUNEGe and ECCOE would like to thank the IAE France team for this wonderful opportunity to build synergies, and for all the support received in designing, promoting and running the overall event: Laurence Macaluso (general manager) Marie Monsterleet (communication and events manager) and Manon Malfoi (administrative and communication assistant). 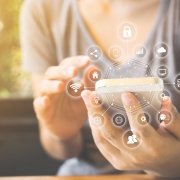 To secure your place and receive the joining instructions in advance, please register below. The webinar programme is available here. 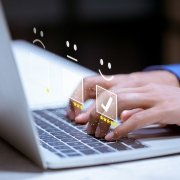 Contribute to shaping the future of micro-credentials!

Review our proposed set of quality criteria for credential description as well as a Model of Digital Credential template providing the most important data about the learning opportunity to be recognised by a given credential. Are they appropriate for a valid and successful credentialisation process and the recognition of learning results at your own institution?

You are also invited to test our Model Credit Recognition Agreement (MCRA) tool and experiment with generating sample agreement templates between HEIs with a view to recognising and validating courses between your institution and other HEIs.

If you are familiar with the concept of digital credentialisation, and associated standard vocabularies, neither of these activities should take longer than 30 minutes to complete, although the actual time spent on feedback provision may depend on the type and level of detail you want to give.

Our public consultation is open until 1 February 2021.